ultimately There are at least 57 people injured, 29 shot dead during a rampage in Thailand. The Thailand police tried a lot to make the gunman give up. They even brought his mother to talk to him into turning himself in. The unfortunate incident took place at Terminal 21 shopping mall in the north western city of Nakhon Ratchasima. The gunman was named Sgt Jakrapanth Thomma. Out of the 29 dead, 23 were civilians, 3 police officers and 3 army officers. 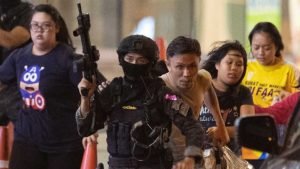 The authorities said that the gunman was Army sub. Lt. Jakrapanth Thomma of the 22nd ammunition battalion. His mother was brought from his hometown Chaiyaphum province. However, she was unable to get inside. She told the authorities that there was no use talking to him. The attacker was in depression and had extreme anger issues. He had a machine gun and two shot guns which he stole. The gunman was angry over a land deal and financial disputes.

People sent into the freezing room. The authorities got messages that it is getting suffocated. The oxygen level was very low inside. The police had to confront him to stop further deaths. One officer was killed during the confrontation and three others were injured. There were times when the shooting was non-stop. Thai media showed in some footage how people around were leaving in pick-up trucks. Thai soldiers were seen helping move the shopkeepers to safety. Also, dozens of people were seen running away from the mall. Children, adults and elderly came together and supported each other. 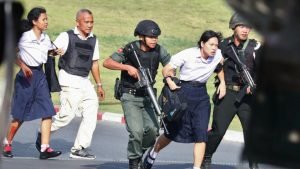 All the survivors waited inside the mall for several hours. The attacker was aiming for the head, the survivors said. He was shooting everywhere and was really good at aiming. Some people made videos and posted on social media. Initially, those inside the mall had no idea of what was happening. There were suddenly people running all around. Most of the people left the mall when they heard the sound of shooting. The situation was unbelievable and overwhelming.

The attacker on social media

Earlier that day he posted “Death is inevitable for everyone”. He did not stop there. He posted again when the shooting had already begun. “Should I give up?,” he asked on his Facebook page. The attacker then uploaded a picture of him smiling. It looked like he was holding a gun in the picture. “I have stopped already,” he wrote in a later post. Account was immediately removed by Facebook.They added that such activities are not supported in any way on Facebook. Prime Minister Prayuth Chan-ocha who, visited the injured in the hospitals. His heart goes out to all the victims and their families. He hopes that such a tragedy never happens again. 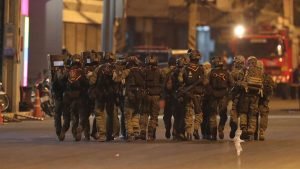 Innocent people shot dead. However, after several hours, ultimately this tragedy finally came to an end. The suspected shooter is dead after killing 29 people.