New Delhi, February 5, 2020:  In terms of art and architecture no other country in the world can match the vibrancy which is possessed by India in all her stretches. Country’s historical monuments decipher how it embraced the art from various cultures. Each monument has a different story to tell. Many of these are known to us. However several others remain buried in the artistic coats of some phenomenal structures. Here we are digging a few scary tales which will send chills down your spine.

With no specific records, this fort is said to be built around 15th century by Ahir King, Asa Ahir. With its architecture inspired by Mughal, Persian, Turkish and Indian styles, this fort is believed to be haunted. According to an ancient folklore, in order to avenge his guru Dronacharya’s death Ashwathama killed Pandava sons and even tried to kill Abhimanyu’s son Pareekshit while he was still in his mother’s womb, which infuriated Lord Krishna. As a result, he cursed Ashwathama that he will roam around alone like an apparition till the end of Kalyug. Lord Krishna also took away the gem from his forehead. Locals say that Ashwathama still wanders around the fort in the night. He keeps asking for turmeric and oil from passersby to treat his bleeding forehead. They even brief that whosoever encountered him has gone insane.

Shimla was once known as summer capital and is still popular among the tourists. Along with its scenic beauty lies its eerie side which people aren’t aware of. The Mansion is a century old castle built during the British era. As per the locals, it is haunted by the spirit of a British gentleman who keeps crashing things. He is even seen by the castle’s previous tenants. Presently the castle is owned by an Indian but locales still report about the ghostly figures loitering in the building.

Protected by Archaeological Survey of India, Agrasen ki Baoli is a 60 meter long and 15 meter wide step well. The estimated building time of structure goes around 13th-14th centuries. If local tales are to be believed the well possesses suicidal black water. The demonic water hypnotizes people and hence they jump off to the well. As a result nobody dares to stay inside the structure after the sunset. However no suicide has been reported in the recent past as well remains mostly dry.

Built around 1930 when India was under colonial rule, Morgan house is located in Kalimpong hill station. It is said that the house is haunted by the spirit of Ms. Morgan who met a premature demise. Morgan house was constructed to celebrate the wedding of Mrs and Ms George Morgan. With a scenic view of Kuchengjunga Mountain it was nothing short of a dreamy land for the Morgans. Unfortunately, their happiness did not last longer. To their horror, Ms Morgan mysteriously died. People say that before her death she was tortured by Mr Morgan. Due to which her spirit is trapped in the structure. Since then visitors complaint about hearing tapping of the heels in the corridors of lodge. 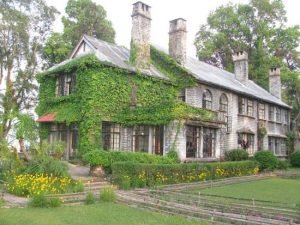