The burning voices against CAA are all around us. A lot of people are coming forward to raise their opinion in front of the law. Countless efforts are building in the way to stop CAB. Today, we are going to make a detailed study of the most serious issues of the present time.

Not at all, we are here to serve a unique perspective on the whole scenario. So, let us start with our in-depth study based on CAA.

No, we are not going to get you back to the backstory. We all are already knowing about the literal meaning of CAA and CAB. It’s the time to hit on the point.

The loop of most offensive protest started from the Assam itself. Later on, several people joined their hands to stand in front of the constitution. Let us have a look at some of the leading protests.

The sequence of protest started from Assam, The reason was signified as the NRC thing got discussed in the Lok Sabha. Right after the bill passed the students in Guwahati, jumped upon the path of opposition.

The students of Jamia Millia Islamia took the rage of protests on 13 December 2029. Thereafter this protest converted into a wide journey and multiple clashes reported at the campus of the university. 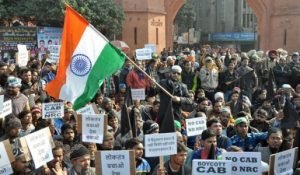 A wave of protests contributed to their disappointment towards the Government’s decision. It all began on 15th December 2019.

JNU Delhi established their fight against NCAA for the sake of bidding goodbye to this bill. Circumstances lost the calm when 60-100 individuals attacked the students in order of keeping a blow to these protests.

The list is too long. Protests held all across the India inkling metro cities and small parts. Schools got shut down, shops went off, roads got chalked, silence turned into screams and the protests are still on.

We really need to think now,

Right from history, the entire nation follows two wings the left and the right. Some people are against the bill while some are taking the favor of it. We all are forgetting that above all we are Indians.

From where does this thought came. Turn back a bit you will realize that the fractions of Congress and BJP are dividing the nation now. Above all, giving it the name of Religious battle is going to be too hard on every one of us.

You all are free to hold upon your opinion. It’s high time to peep into politics. These two powers are trying to break the essence of India in the name of Muslims and Anti Muslims.

Believe it or not, but CAA or CAB is not going to affect the livelihood of any community in India. It might be just a bleak factor that is misleading us from other critical problems like economy, unemployment, development, and stability. It seems like the Indian Government wants the citizen to stay indulge in the roar of religion, division, and civilization. Clear assumptions are there that Congress is soon going to take full-fledged advantage from this move.

But the question is, what about the common man of our country. How far we are going to suffer like this. Being at any one side, facing very same basic challenges. Citizens are finding the answers to endless questions at the moment. Let’s see what would happen next.