After reading this headline, we conjure up a mental image that looks like the one below.

This is a pictorial representation of Indian Education before, during, and after British Rule.

But now let’s go into the details of past, and present Indian Education and explore in the details which we don’t know. But before explaining to you the Indian education history, we should know the exact meaning of education. Education is something that empowers our minds and helps us to think in positive ways.

Now coming to British Rule, it arrived in India on August 24, 1608, and they started from Surat. So now let’s explore the early ages of Indian Education.

Before the alignment of British rule in India, our country was the richest country across the globe. And as now there are states and every state had a chief minister at that time every area had its King and as we had parliament members at that time we had a dynasty consisting of the minister (Mantri), a chief, a hunter, and every role which we can think of.

Earlier education was like a privilege and very less were privileged with this because of gender preferences. Girls were not so privileged earlier that they could get an education; only males were privileged with this power and this was commenced under the supervision of a Guru (teacher) in traditional schools called gurukuls, pathshalas or madrassahs. And at that time printed books were not sold instead of them Gurus used to write their books, which is known as manuscripts. Instead of biology, physics, or chemistry, their books were the Vedas, the various Sastras, the Purans, the more well-known books on Ganeeta, and Jyotish-Sastras, and epic literature.

The main subjects taught in the schools where reading, writing, and arithmetic. Ramayana, Mahabharata, Bhagavata. And they mainly concentrate on practical knowledge like Dhanush baazi, hunting, and fighting (talwarbaazi).  In short, we can say they were prepared to be ready for war from a very early age.

Now, when Britishers arrived in India, they looked down upon education. To improve the position, the first step toward the betterment of education was made under The Charter Act of 1813. This act sanctioned 1 lakh rupees for improving education levels among Indians. But under this act, a trick was hidden as this act gave permissions to missionaries to come to India. 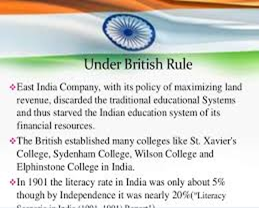 In 1835, Macaulay introduced English to India with the intention of creating a class of culturally adapted Indians who would act as cultural intermediaries or translators between the British and the Indians. And the roots were first laid in 1822 AD by the name of St Paul School, which is presently located in the Darjeeling hills of the GORKHALAND area, which was originally located in Kolkata but has since migrated to Darjeeling. They changed the roots of education; instead of Gurus, they bought the concept of teachers, and instead of open areas, mosques or temples they initiated the concept of buildings with tables, chairs, and books. Also, they changed the subject and formulated the concept of science. English, mathematics initially, then added many more things, but they didn’t change the practical knowledge. they adapted the gurus in practical knowledge, which includes horse riding, Dhanush baazi, hunting, and everything else. 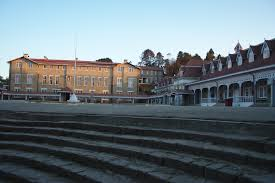 Coming to this era, now we are getting smart classes, and everything is sorted out. But in the beginning, things were not so sorted as after British rule Indians had to cope with everything and only 20% of Indians were educated at that time so it was difficult for all of them to plan the plot of the education graph again from the scratch but they did it. 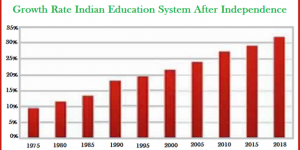 This graph is a representation that how much our education has developed so far. All the credit goes to the constitution and its coworkers who made this possible for us.

However, the road was not easy at all. A Central Advisory Board of Education was counseled by the national and state governments. There were a number of organizations that were linked with the Department of Education such as the All-India Council of Technical Education, the University Grants Commission, and the National Council of Educational Research and Training.

All were advised of their roles. The first body was for the technical education which maintains the standards of the technical education. The second body was made for maintaining the standards of teaching, examination, and research in the universities. They had all the authorities to enquire into the financial backgrounds of the universities and to provide them with their needs. The third body was for maintaining the quality of school education.

There is a large increment in the number of educational institutions. The primary schools, experienced rapid growth because states paid attention to elementary education. Many plans like Beti Bachao Beti Padhao, Padhega India Tabhi Toh Badhega India, School Chale Hum, Midday meals and n numbers of plans were introduced so that India can grow in the education field. As a result, we stand on 4th rank world best education with the support of colleges like IIT, NIIT and many more private colleges and schools who have marked excellence in the field of education.