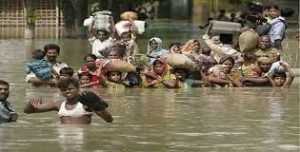 When natural calamity takes toll over life humans are bound to be helpless in front of nature. But what is more heart wrenching is the kind of apathy the  state of Bihar is receiving in present time from the country is quite disturbing. Media is still busy in #Howdy Modi and all other unnecessary stuffs while ignoring the natural calamity Bihar is facing.

The monsoon rains have turned into situation like flood across state of Bihar and Uttar Pradesh with recorded deaths up to 148 till now. Such heavy flood is result of delayed monsoon. It has been raining heavily in Patna the capital city of Bihar and a red alert had been announced for 13 districts of Patna. Be the posh areas or slum areas all are submerged under the water.

Approximately 4000 people including women and children have been rescued by NDRF team from flood prone areas. Even the circulated pictures of Bihar Deputy CM Sushil Modi and kins being rescued is much talked about. Bihar CM Nitish Kumar had conducted an aerial survey of the flood affected areas and was seen giving instructions to the officials to manage the situation further.

A tweet from Narendra Modi also came regarding Bihar floods and his actions to better the situations. But for flood affected people it is not enough. They are just fighting for their survival and basic amenities which are still beyond their reach.