Well when it comes to scar, every girl’s hate it. However, it is important to have a visual reminder, how precious life is!! You should feel more comfortable when you are naked, as everyone is sensual women and very tactile. Everyone enjoys their body and they must be thankful for the body they have. You all should be proud of scars because they meant you have life and the interesting one! 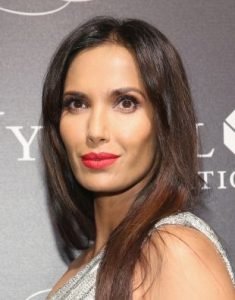 Padma Parvati Lakshmi Vaidynathan, known professionally as Padma Lakshmi, is an American author, actress, model, television host. She was among the first Indian models who have gained worldwide popularity. Padma Lakshmi is also known as a famous actress and is well known for hosting the US cooking competition program, Top Chef. Apart from all these, she has gained a vast fan following for her beauty and hotness. She has raised a bar for the Indian models in the modelling industry. 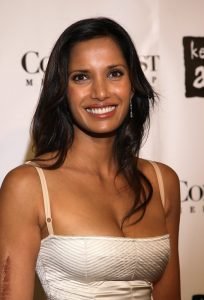 History of her Scar

When the Padma was 14, she was involved in a car crash in Malibu that left her with a seven-inch-long scar on her arm. Back in 2001, she wrote an essay for US Vogue detailing flying off a freeway in her family’s red Ford Mercury sedan and falling 40 feet down an embankment. An ambulance carried her to the hospital. Her right arm had been shattered and her right hip had been fractured. After surgery, she regained the use of both of them but was left with a long scar on her arm. It was half an inch wide and seven inches long. 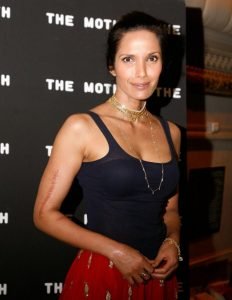 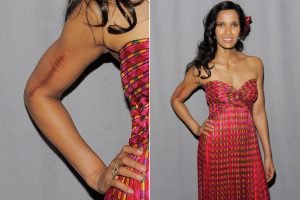 Padma admits that for years she felt self-conscious about her blemish and worried she’d never had a successful modelling career because of it. She underwent painful treatments to lighten her scar, but today the Emmy winner prefers not to hide it or cover it with makeup.

What does she say about her scar?

“I love my scar. It is so much a part of me. I’m not sure I would remove it even if a doctor could wave a magic wand and delete it from my arm. The scar has singled me out and made me who I am.”

“I was brought to believe that the female form is a beautiful thing. I think it’s not so much what you do but how you do it that matters. I don’t think I’ve done anything exploitative.”