New Delhi, February 25, 2020: After so many years of discovery, mystery still surrounds innumerable landmasses on this earth. One of those is islands. Although, most of the intriguing islands are well-explored, yet several remain enveloped in mysteries. Their secrets were learned long ago but the truth remains layered to date. Hidden dangers, mysteries origin makes them dangerous. Sometimes, islands behave in ways seemingly inexplicable to those who discover or study them. Besides, some have just vanished.

The landmass lies in the Pacific Ocean. Around 100 years ago explorers reached the island. They found ruins of Nan Madol. The island is situated about 1,600 miles from Australia. Believing it to be haunted locals refuse to go near the ruins of Nan Madol. On the other hand, archaeologist still wonder why someone would build a city in the middle of an ocean. That too, so far away from any known civilization. The ruins date back to 1200-1700. Nan Madol is made up of 92 artificial spread across 200 acres. Some of the walls are 25-feet high. Above all, the total weight of black rocks is 750,000 metric tons. Hence, the mystery lingers as to how the city was ever built. As per the locals, magic was used to create the isolated city on the island.

The Mysterious Islands was mapped in 1700. At that time, Isla Bermeja was shown off the Yucatan Peninsula’s coast. The island was just what the country needed to extend its claim on offshore oil and stop the United States.  The island was supposed to lie 55 nautical miles farther than Mexico’s 200-nautical-mile territorial limit. By claiming it, Mexico would have extended its oil claims into the middle of the Gulf. Although, it was shown on the map the search team couldn’t find the island. It just vanished! Under underwater sensing devices and aerial reconnaissance assets were used but it just simply disappeared. 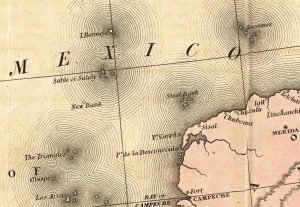 The Land of No Return Island

Barsa-Kelmes is the largest Mysterious Islands of the Aral Sea, located in Central Asia. It lies between Kazakhstan and northern Uzbekistan. In Kazakh language, Barsa Kelme’s means ‘the land of no return’. The name finds its origin from ancient legends. These tell about escapees who had stayed for about one year on the island. However, when returned home they appeared to have aged decades. It is said to be cursed. Moreover, a large number of people disappeared on the island. If Kazakhs are to be believed their disappearance is associated with the flying lizard from prehistoric times. 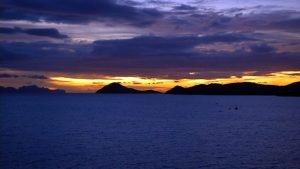 The Island of Dolls

The island of dolls is located in Mexico City. It was once inhabited by a loner Julian Santana Barrera. According to the legend says that once a girl drowned near the shore. Afterward he started to find many broken dolls floating nearby. Julian began dressing them up and hang them on the trees as a sign of respect. Simultaneously, protecting himself from evil, and trying to appease the girl’s soul. He had been collecting these terrible dolls for 50 years until he also drowned. He was found in the exact spot where he found the girl’s body decades before. 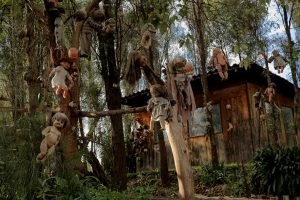