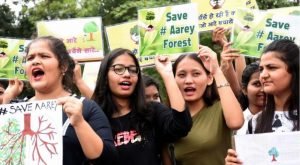 When the world is thumping the back of a tenner environmentalist Greta Thunberg and we are finding hard to breathe the fresh air. Strangely we are facing the question of choosing between the usage of “AAREY FOREST” for whether to be used for infrastructure purposes or let drive fresh air from them.

AAREY FOREST is situated in the Goregaon east in the ever-growing population state of Maharashtra. It was in the year 1949 when Prime Minister Pandit Jawaharlal Nehru laid the foundation of the Dairy industry at AAREY. Later the plantation started their which later took a form of forest and now it includes 12 villages. It holds a major part to flora and fauna to the extent that now it is also known as “Lungs of Mumbai”. Therefore any kind of such activity will hamper this gift of nature.

What is the issue?

The ever increasing population of Mumbai has led to the problem of commuting. As a result, long hours of jammed traffic is giving rise to many issues. Thus to cater to this issue Mumbai Metro Rail Corporation Ltd (MMRCL) which is in joint collaboration with Government of India and Government of Maharashtra is planning to laid the foundation of Metro that shall be underground. The route for this will be from South Bombay and Bandra to the domestic and international airports which will deal with approximately 17 lakh commuters on average daily. For this

purpose a suitable land is needed for the proper execution of the planning. So the search operation for such perfect place stops at AAREY FOREST which is a hub to massive flora and fauna.

What should be done?

Clearly this is an issue of choosing between environment and infrastructure. The protest of Mumbai residents is to save the environment that can’t be made again overnight. When we are facing so many devastating results due to harm to the environment then in this situation cutting down trees would lead to further worsening implications. The need of the hour is to save the environment. Thus there be a balance between the development and preservation of nature. We just not can’t stake the precious life in the name of development by killing the lungs of nature. We are already suffering and can’t add more to it.
Petitions have been already cased in Supreme Court against the deforestation of AAREY FOREST. As per the petitioners, the MUMBAI DP2034 has already alternative sites for such purpose such as Bandra reclamation, Backbay Reclamation, Colaba, Bandra
Kurla Complex but unfortunately they are still eyeing at AAREY FOREST. The state is defending themselves by stating that in no official paper work out it has been termed as forest and this land was purely intended for commercial purpose.
Though the official paperwork doesn’t show any proof of it being categorized as forest but in current time it is our moral duty to save trees and think of social benefit. We just can’t choose the development and infrastructure over the health and life of netizens.