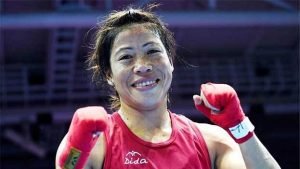 The famous Six-time champion M C Mary KOM (51 kg) grabbed the unprecedented eighth medal at World Women’s Boxing Championship. She was playing against a Colombian player named “ Valencia Victoria” with a unanimous 5-0 verdict. (mary kom achievements)
With this glorious achievement, Mary KOM has itself polished her own record as a successful boxer in the marquee tournament.

Along with this achievement, she had also won six gold and silver but this will be her first time winning world medal in 51 kg.

Looking back at her past of her incredible career she has a record of winning Olympic bronze medal (2012), five Asian titles, gold medals (mary kom achievements) at Asian games along with commonwealth games and other numerous international top finishes. This year even she had won gold medals at India Open in Guwahati and President’s Cup in Indonesia. Plus adding to her feather she is also a member of Rajya Sabha.