A Beautiful Couple of Two Nation

Australian all-rounder Glenn Maxwell was a hot topic of every gossip as this Australian player got married to an Indian Girl Vini Raman. Since the news of their dating was confirmed and the news card of their wedding is also in the queue. So this beautiful couple drained off all the rumors at Melbourne. Where they both get engaged with each other for life. Vini Raman shared the photos of their engagement on Instagram. 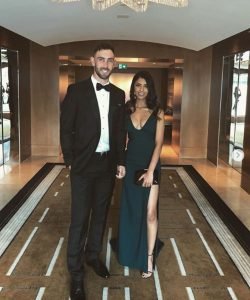 Maxell was one of the destructive batsmen of Australian cricket and there are a lot of matches that he won for the team single-handedly. This player got enough fame in the Indian Premier League. Because of his dynamic performance and become one of the biggest hitters of T20 Cricket. Hence Glenn Maxwell was sitting outside due to his bad performance in competitive games. He got picked for the South Africa series but not get a single chance to prove himself.

There are many series in the queue but they all are backed off due to Novel Corona Virus. Hence Maxwell was trying to hold their place in Vivo Indian Premier League and play with the Kings XI Punjab franchise. He had not played the last season so this year he tries to secure the place in the team. He also tries to hold a place in the Australian Test cricket team. 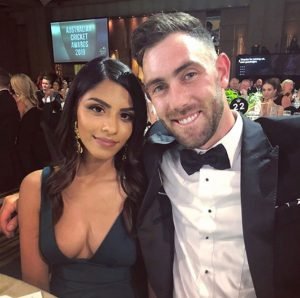 Maxwell was dropped from the BBL team and she is not playing cricket since February. The main highlight of his wedding is when Glenn Maxwell wears Indian origin Kurta and follows all the Indian culture rituals. Glenn Maxwell wears Green Kurta in his engagement. They are dating each other for two years and now they got engaged on Sunday. This couple was also spotted at the Australian Cricket Awards 2019.

Vini Raman is a pharmacist in Melbourne. On Sunday night Vini Raman posted a photo of her engagement in which she wrote the caption that “ Last Night we celebrated our Indian engagement and I gave @gmaxi_32 a little teaser of what the wedding will be like. Shout out to both of our incredible families and all our friends who came to celebrate with us on such short notice- we are also grateful to be surrounded by some pretty amazing people”. She also thanked the photographer for clicking such adorable photos of them. 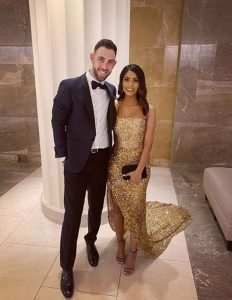 They both posted some adorable photos of their engagement. Everybody knows about their relationship but no one expects that this couple is planning to tie up in the knots. Hence Maxwell is not the only one to get married to an Indian lady. Australian Bowler Shaun Tait also got married to an Indian lady named Mashoom Singha in 2014. So the relation between foreign players and Indian girls becomes a bit common. 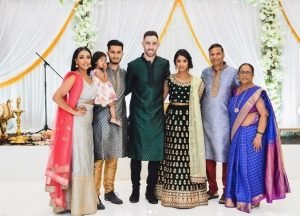 Now after their engagement everybody is waiting for the news of their wedding and hope so this news will come soon.