Besides being a country of rich diversity, India is also known for various haunted places. These are situated in various different states of India. A Horror story or some horrible incident is the reason behind such haunted places. It is something interesting to know about them. If you are also a fan of horror stories and movies then you must read this till the end. 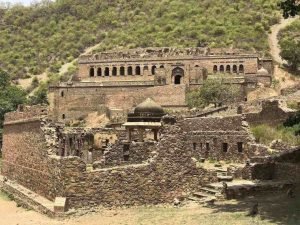 Forts are undoubtedly the beautiful creations of architects. But it is interesting to note that few of them have horrified incidents associated with them. Bhangarh Fort which is situated in Alwar, Rajasthan is the first haunted houses in India. There are various stories prevalent that spirits roam around this fort. Some observations by local residents and tourists also indicate that anyone who visited this place in the dark showed unusual behavior. These unusual behaviors include anxiety, abnormal behavior.

Besides this, stories of missing people who visited there are also prevalent. Due to all these reasons, the Archeological Body of India suggests every tourist not to visit it after 6 pm and before sunrise. Agrasen ki Baoli is another beautiful architectural piece situated in the heart of Delhi. As it includes Baoli in its name which means a reservoir used by ancient people to store water in it. So the horror story is only associated with this word. This place has a well in it having black water and is said to have the power to attract people. Also, this power leads to drowning of people into it. Besides this, it is also said and advised not to go there in the dark because of unusual incidents and ghost spirits there. There are other haunted places in the list after the above mentioned 2 beautiful architectures. That is the Film city in Hyderabad with the name Ramoji Film City. Though various stories are shot in this film city. But there are various incidents heard from the crew members and tourists visiting there.

These include incidents like pushing by invisible forces, food left over if not in the room, lights turning off, strange voices in the room, equipment getting destroyed and ripped clothes by unseen forces as said by women. All this is because of a story attached to this. This story is related to the building of this film city on the grounds where Nizams fought wars. So it is believed that it is only the spirits of dead soldiers which haunt everyone. 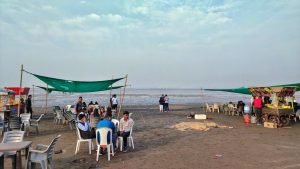 Next in the list of haunted places in India is Dumas beach. It is situated on the Arabian Coast in Gujarat state. According to people of the nearby region, there are horrific sounds of ghosts in this region. These sounds warn everyone going in the sea not to go in it and to come back. Also if anyone doesn’t show his concern to such voices, it drowns in the sea.

Like others, there is a reason behind it too. This reason is that the area on which this beach is there was an earlier cremation area for Hindus. So it is believed that it is the voices of such dead persons only who warn and haunt people. 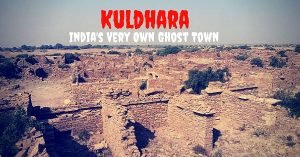 Like Bhangarh Fort, there is one more haunted places in Rajasthan. This place is Kuldhara Village situated in Jaisalmer. According to a story, it is believed that Palliwals brahmins of this village and 84 villages fled overnight. While leaving, they cursed village that no one will ever live here. That is the reason that even after 200 years of this incident, no one settled here.

There is also a story behind their leaving the village overnight. It is believed that the State Diwan was a very cruel and ruthless person and imposed heavy taxes on villagers. Also he wanted to marry Kuldhara’s chief ‘s daughter. But because his character was very bad, the chief denied it. On knowing it, State Diwan threatened them that it would be very cruel and negative for all of them. As a result, they all fled and cursed that place that it will always remain barren. It is unknown where all of them went. But this curse is still there due to which many horrified incidents are too observed in that place. So it is believed to be the most horror place in india. Mumbai is a place of chawls and you can witness various chawls in the state. But I am here to tell you about an interesting and horrifying chawl named D’Souza Chawl in Mahim region of Mumbai. There are various rumors of people living in this chawl that the spirit of an old lady roams there in the chawl. So from a safety point of view, people don’t come out in the dark.

There is a story behind this too. It is believed that many years ago, one old lady fell and drowned in the well. According to the people of this chawl, she cried for help but no one heard that. So that is the reason believed for the spirits roaming around the chawl. Goa is known for its beautiful beaches and churches. This is a famous tourist destination but there is one horrifying story about a church named Three King Church in South Goa. It is associated with the death of 3 kings in its premises who were in revenge to solely rule the village Cansulim where this church is situated. Out of which 1 king first poisoned other 2 kings and after that in fear of villagers poisoned himself too. So due to this, it is believed that their ghost spirits haunt the premises of the Church after the sunset. Next in the list of haunted places in India is Jatinga in Assam. It is a hilly village in Assam. There is not a horrifying story but more of a mysterious places in ndia . It is because of a mystery attached to this village. This mystery is that every year, large no. of birds suicide in this village. It happens after sunset from September to November, when they fall from the sky to trees and buildings. Till now, no strong scientific reason is known for this mass suicide. Dow Hill is a hill station and is situated in Darjeeling. According to various heard stories, it is believed that there are 2 schools The Victoria Boy’s High School and Dow hill Girls Boarding School which is believed to have some supernatural incidents happening there. These incidents include children’s voices from the schools even when it is closed.

Besides this, locals visited nearby forests and saw murdered bodies there. Also, they too saw a young headless boy in the dark. So it is advised not to go there after sunset. Last in the list of haunted forts among the haunted places in India is Shanivar wada Fort. If you are a movie lover, then you must have heard this word in the movie Bajirao Mastani. But now let us know about the horrifying tale associated with this fort. It was earlier of the Peshwas and Peshwa Narayanrao was its king at 18 years of age many decades ago. According to history, it is believed that he was killed by his aunt by plotting a plan since she wanted to be queen of the state. Due to this only, his spirit still haunts the place and cries for help from here. So tourists are advised to avoid it in the dark.

So above are some of the haunted places राजस्थान-की-शान-है-यह-अनूठ in India. Though it is interesting to know about their mysteries, but, I would surely suggest to you all to stay away from these places and be cautious while you are going there.