Tokyo, March 8, 2020: For half a century, thousands of life-weary Japanese have made one-way trips to the Aokigahara Jukai forest. It is often addressed as suicide forest. The 30-sq. km tract of woodland in Yamanashi Prefecture lies on the northwest flank of 3,776-meter Mount Fuji. The mount is Japan’s highest peak. It’s a dark place of stark beauty, long associated with demons in Japanese mythology.

Aokigahara is sometimes referred to as the most popular site for suicide in Japan. As per the reports, in n 2003, 105 bodies were found in the forest. This was more than the previous record of 78 in 2002. In 2010 around 200 people tried to give up their life in the forest. Out of these 54 died. Though, the statistics on Aokigahara’s suicide rates vary. Perhaps the forest is so lush that corpses aren’t recovered. Consequently, some can go undiscovered for years or might be lost forever.

Self-inflicted death doesn’t carry the same stigma in Japan as it does in others. Seppuku which is a samurai’s ritual suicide thought to be honorable. It dates back to Japan’s feudal era. And while the practice is no longer the norm, it has left a mark. In Japanese culture suicide is seen as taking the responsibility. Additionally, Japan has highest suicide rate in the world. 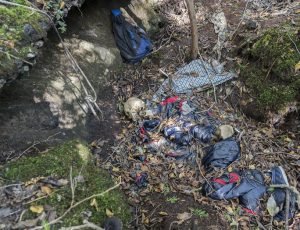 Why they chose Aokigahara?

Three decades ago, a Japanese psychiatrist interviewed few Aokigahara suicide survivors. As a result, they found the key reason for forest’s suicide cases. Most of the survivors believed that here they would be able to die successfully without being noticed. Some may have traveled to the forest from other provinces. Also they share a strange belief. According to them dying here would allow them to share the same place with others.

Volunteers who search the area for bodies and those considering suicide typically mark their way with plastic ribbon. This is done to avoid missing in this leafy labyrinth. Otherwise, one could easily lose their bearings after leaving the path and become fatally lost.

Rich with magnetic iron, the soil of the Suicide Forest plays havoc on cellphone service. Neither GPS systems nor even compasses work here. Hence the tape can be so crucial. However, some believe this feature is proof of demons in the dark.