New Delhi, March 12, 2020: Time travel forms the base of many movies and modern day web series’. Though many yet believe that traveling from one time to another isn’t possible. However, scientists do have hope. Greatest scientist Einstein’s Theory of Relativity does prove the fact. His theory of relativity said, there is bend in time and space. Likewise a Serbian-American inventor and electric engineer Nicola Tesla believed that time travel are very much feasible. Not only this he is said to have traveled time for which people even tagged him mysterious.

Nicola Tesla was born in 1856. Born and raised in the Austrian Empire he was bright as student. He studied engineering and physics. In 1870s without receiving a formal degree he mastered in Physics and gained practical experience in the early 1880s. He immigrated in 1884 to the United States. Nikola Tesla was conducting research in 1895. This was when he got the first indication that space and time might be influenced by using a highly magnetic field.

Tesla was experimenting with high voltage electricity along with magnetic fields. This lead him to discover that time and space may be deformed to create a door. Hence, this door can lead us to another time. Though, he also realized that traveling through time came with some real dangers.

Story came from New York Herald reporter. It was back in 1895. The reporter wrote that he found Tesla sitting in a cafe. That was when he was just hit by 3.5 million volts of electricity. At that moment, Tesla told him that he would not be very pleasant company to be around as he had almost died. He narrated reporter the whole incident. He said a three-foot spark had jumped into the air and hit him on the shoulder. Meanwhile, his assistant immediately cut off the power supply which saved his life. 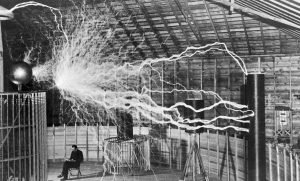 He saw past, future and present

The newspaper reported, during this incidence Tesla was in contact with the resonance from the electromagnetic charge. He had found that he went out of his space and time window. Therefore, he had been able to see the past, the present and the future at the very same time. Tesla admitted that he got paralyzed in the electromagnetic field and was unable to move. Fortunately, his assistant was beside him and he turn off the power before any severe damage.