New Delhi, March 12, 2020: A mysterious water body is located in Chhatarpur district of Madhya Pradesh. Its name is Bhimkund. The natural water body purportedly dates to the era of Mahabharata. Turquoise waters, immeasurable depths, and disaster indications are its significant features. Despite technological advancement, no scientist has a clue about the source of its water.

The kund lies in an underground cave and is about 30 metres from the mouth. To the left of the entrance is a small Shivalinga. The roof of the cave has a small opening just above the Kund. It is said that the kund created by Bhim, the strongest among Pandvas. He said to have hit the ground with his Gada and Kund came into existence. The depth of this pool is believed to be measureless. Local administration collaborated with the Discovery channel to measure the depth of the water body. They even installed devices but all in vain. As a result, the depth and the source of water is still unknown.

The kund finds its origin in Indian epic Mahabharata Era Kund. It is said, when Pandavas were in exile, they were passing through this place. Meanwhile, their wife Draupadi  asked for water. Therefore, Pandavas started searching for water reservoir but unfortunately, they could not find one. That was the time when Bheem, the strongest man on earth (according to holy Mahabharata) smashed the earth. He hit it with his Gada and that’s when this Kund came into being. The shape of the Kund also resembles somewhat like Gada. Hence, the Kund was named after him ie; Bhimkund.

The pool has turquoise waters. It is so clear that one can see the water creatures clearly unto certain depths. There are some caves around no one ever dared to find where they lead. Every element of the pool is a mystery. Although the stagnant water often decays it is unlike Bhimkund. People even believe that its water has medicinal properties. 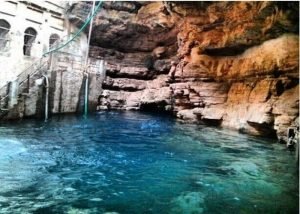 The most mysterious feature of the Mahabharata Era Kund is its warning system. For Bhimkund is also an indicator of upcoming natural calamities. The fact was well examined by the locals. They say when the water level in the Bhimkund rises above upto 15 feet  it indicates disaster.  In the other words it hints that there is a natural calamity about to occur. At the time of Tsunami in 2004, the water level here rose by 15 feet. Likewise, at the time of Nepal or other earthquakes the phenomenon repeated. However no concrete findings could examine the reason and fact.