THE SEEDS OF HATRED STILL NOT DEAD: REAL FACE OF DELHI RIOTS 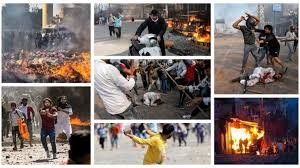 WHAT DELHI RIOTS ARE ALL ABOUT?

The seeds of hate  is regularly been  spreading upon and in no time, it has taken lives of innocent people. It is nothing but only hate and apathy towards people who hold similar characteristics like us.

What can be more shameful when Iran made a tweet condemning the wave of organized violence against Indians Muslims. It has urged Indian authorities to ensure well-being of all Indians leading a path of peace.

The newspapers is being filling with sad and agony stories telling stories of our departed  loved ones. These riots have taken their loved ones from them. For many do believe that it is a sponsored communal massacre. Such riots really do make our heads hang in shame.

on night of 23rd February Delhi witnessed upsurge in series of riots and violent deaths in Jafarzadeh area leading to death of more than 46 people and the number is still counting. so, let’s learn what exactly led to this deadly result and who all are responsible for this.We should know the root cause behind it. As per media report more than 46 number of people have died so far.

The normalcy has been dead in areas of Gopalpur and north east areas of Delhi. It was a heart wrenching scene to see police corps being standing as a mute spectator or else say fully involved in the whole crime scene.

CAUSE BEHIND DELHI RIOTS

The normalcy will be hard to return upon. It is now  the sole responsibility of government “AAP” restore faith of common people. the bench has urged Delhi government CM to visit the affected areas in order to instil confidence in people.

They have instructed to provide safe passage to people burying their kin. They also provide safe passages to ambulance, shelter and basic amenities to affected people. Most  importantly providing legal help to the people who have lost their houses, vehicles in the riots.