16-year-old Swedish Greta Thunberg is the face of youth demanding global climate action. She about a year ago started Friday for Future strikes in Sweden which later turned into a global initiative. She became famous after her speech at the UN Climate Summit in September 2019. “ I shouldn’t be up here. I should be back in school on the other side of the ocean. Yet, you all come to us young people for hope. How dare you? You have stolen my dreams and my childhood with you empty words. Yet, I am one of the lucky ones. People are suffering.” Greta said in her speech addressing the world leaders. 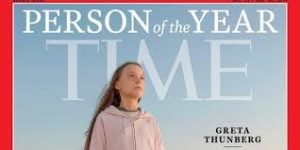 Each year the magazine features the most influential group, person, idea or movement of the past year. In the year 2018, it was ‘The Guardians’, which is a group of Journalist who had been targeted for their approach. In 2017 ‘The Silence Breakers’ were recognized for their work towards reports of sexual misconduct. This is the third time in a row when the person chose is not a world leader. In the year 2016, the Person of the year was American President Donald Trump. The magazine has also featured Adolf Hitler and Joseph Stalin as the Person of the year.

Earlier this year Greta nominated for the Nobel Peace Prize. Additionally, recently the Time’s Magazine has chosen Greta as the Person of the year. The tradition of ‘person of the year’ has started in 1927. Above all Greta is the youngest person who get selected ever in the history of magazine. 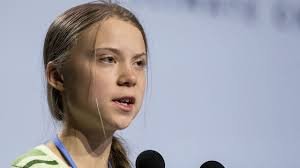 The editor in chief of Time’s Magazine Edward Felsenthal wrote: “Thunberg has become the biggest voice on the biggest issue facing the planet—and the avatar of a broader generational shift in our culture that is playing out everywhere from the campuses of Hong Kong to the halls of Congress in Washington”. She also added, “She was a solo protestor with a hand-painted sign 14 months ago. She’s now led millions of people around the world, 150 countries, to act on behalf of the planet.” 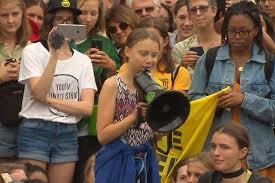 The shortlisted candidates this time included Donald Trump, The Whistle blower, The Hong Kong Protesters and Nancy Pelosi.
Time’s also introduced four new categories. It recognized US women’s soccer team as an Athlete of the Year. Entertainer of the year rewarded to Lizzo. Moreover, Business Person of the Year award went in the hands of Bob Iger who is the CEO of Disney. Another category introduced this year is ‘The Guardians’ for the people who risked their career for defending the law. This category included the whistle blower, Mark Sandy, Marie Yovanovitch, Ambassador William Taylor, Fiona Hill, Lieut. Colonel Alexander Vindman.