In a bizarre incident when most people popped their eyes out in dismay upon learning such unique Championship surprisingly only 3 out of 20 participants (Worlds Best Fart Championship) mustered the courage to pass the “foul wind”.

Recently a “ fart competition” was held in Surat regarded as first ever such competition in India. But it failed miserably as most people couldn’t overcome their shyness to fart in front of massive public. 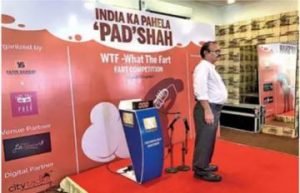 Interestingly their were categories such as “ the longest” and the “ most musical” in the competition. Also there was a special device to measure the fart parameters. However there was no announcement of winners instead they were all given gift hampers for turning up on the stage.

The organizer unperturbed by the failure of such unique competition (Worlds Best Fart Championship) have future plans to hold next Farting competition in  Mumbai. So lets wait and see what happens next?