Zara sa Ghoom Lo: couple recreated iconic scenes from DDLJ on a budget – It is surely a dream of everyone to ride the Euro-rail in Switzerland. At the same time, everyone hopes to find their very own Raj or Simran to gear up their hopeless romantic life. Are you not on the list? Though it does not matter whether you are from Gen X, Gen Y, Gen Z, millennial, or a boomer. But to dance in the soothing tunes of “Zara sa jhoom loon mein” in the backdrop of the Alps is the most common desire of people of all generations of our country. Well, luck favoured for the wander lusty sweet couple Awasthy and Sarath as they managed to take a special DDLJ trip. They also explored all the amazing places, which they once saw on the TV and film. They tried to recreate a few scenes from the iconic movie “Dilwale Dulhania Le Jayenge” which is popularly known as DDLJ. 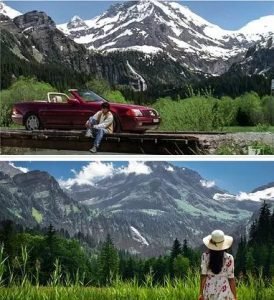 It was though quite an unexpected trip for Awasthy and Sarath. They were on a hike when they discovered a bridge in the serene town of Saanen and it was displaying a picture of Raj and Simran. That’s when they discovered the beautiful Swiss bridge, hiding in a corner of Saanen, right in front of the train station where the iconic, “Palat, palat, palat” scene was shot. The Saanen bridge was also used for shooting a lot of other scenes. It was only after experiencing the palat, palat scene, and feeling the warmth and love, they decided to recreate the magic. Remember, when Kajol spotted a castle-like church and excitedly wanted to visit it and exclaimed,” What a beautiful church?”. Well, Awasthy and Sarath managed to get an amazing view of the church. It had a beautiful garden in the church. 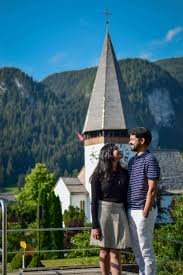 This amazing couple had to face a real struggle when they were desperately looking for a tranquil location. It was the hidden wooden bridge on which Shah Rukh Khan and Kajol shook their legs on “ho gaya hain tujhko jo pyaar sajna” with the Alps on the background. This bridge was extremely difficult to find and nobody really knows about the whereabouts of the exact place. So, the couple set on a mission to find the bridge wholeheartedly. They were extremely keen to find the places and to know where the waterfall is actually located. They saw various pictures and turned the google out as their holy book. But after immense research and looking for the important leads of the region they finally found the bridge after scouring through maps.

The couple visited and explored all the iconic places in Switzerland where the makers shot the scenes of DDLJ. The duo continued their journey to a spot in Zwesimmen where the iconic love story of Raj and Simran started. That was the place where Simran stops to buy the Swiss Bell and misses her train. Remember when drunk Simran runs into a confectionary while dancing on the beats of “Zara sa jhoom loon mein?”. Well, it turns out that the Early Beck has been a tourist spot in Gstaad for a long time and now it has a few more luxury stores around it. The duo also visited the quaint church in Montbovon, the one that Raj and Simran had also visited. 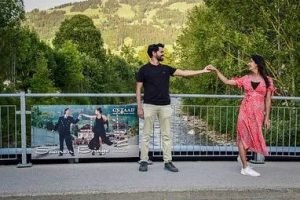 Story of Awasthy and Sarath:

Awasthy and Sarath were two complete strangers. They met on a matrimonial platform and bonded strongly on a mutual love for travel and exploring. In a span of two years, they have travelled 24 countries on the weekends while they handle their full-time jobs in the field of Engineering and thus setting massive couple goals for all of us. Moreover, Through their recreation the duo was quite close to create the magic and set the major couple goals.

The couple also revealed that Switzerland, being a country with extensive connectivity. It was very simple to reach as location via trains and buses. They took a pass for a single day which costs around INR 3600. That was the cheapest way to travel as one is free to take any bus, train, boat, or even some cable cars. They did a marathon trip covering most of the locations on a single day. 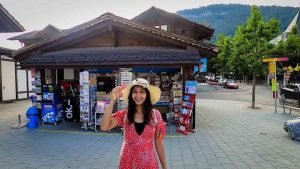 In a conversation, they revealed that they had shortlisted few locations and among those, the bridge topped the list. They finally found the bridge and also realized that the beautiful place has so many trees surrounding it. And that is the reason they were unable to find it easily. Just because of the density of the trees the place was out of sight of the public for such a long time. They revealed that the views from the location are heavenly and they were literally getting goosebumps standing there. They also felt the thrill and excitement being in the same location where the makers shot the iconic movie.