Divorce between Aamir and Kiran

Mr. Perfectionist “Aamir Khan” and his wife “ Kiran Rao” announces to world about their decision of getting divorce. Spending a marital bliss of 15 years they have decided to part their ways. The news of separation came after joint statement on Saturday. The Aamir Khan age is 56 years. moreover, the Aamir Khan wife Kiran is a known personality. For many divorce reason remain unknown.

“In these 15 years together we have shared a lifetime of experiences, joy and laughter and our relationship has only growing in trust, respect and love. We would like to begin a new chapter in our lives- no longer as husband or wife but as co-parents and family for each other.

They both have a son, “Azad Rao Khan”.  The couple enters the nuptial knot on December 28, 2005. Amazingly, they have done remarkable contribution for the cinema. Indians are much knowing Aamir Khan family.  Often they are being label as one of the fine creative associations.

They met on sets of Ashutosh Gowariker Lagaan ( 2001), one of the most commercially successful Indian movies. Their love started blooming while after he got divorce from his first wife “ Reena Dutta”. From his wife he have two children, “ Junaid and Ira”. They had their divorce in year 2002. 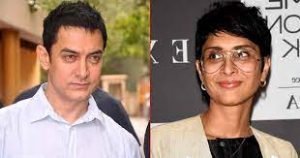 Who is Kiran Rao?

Moreover, they are co – founder of a nonprofit organization, “ Paani Foundation”. It works towards making rural Maharashtra drought free. The Rao is a star of independent Cinema. She has been even creating an eclectic hub for cinema in Mumbai.

However, in their plain statement assures that they will continue collaborating on work and pet projects. “We began a planned separation some time ago, and now feel comfortable to formalize the arrangement, of living separately yet sharing our lives the way an extended family does.

Plus, they end their statement saying:” A big thank you to our families and friends for their constant support and understanding about this evolution in our relationship, and without whom we would not have been so secure in taking leap.

We request our well wishers for good wishes and blessings, and hope that- like us- you will see this divorce not as an end, but as the start of a new journey. Aamir khan is one of the top stars of India after his years of struggle in the film industry.

Aamir Khan and his controversies

The actor gain name after launch of film, “ Qayamat se Qayamat Tak”. Aamir Khan movie are a quite hit.  At one time media started calling him “one film wonder”. However, many controversies encircle him till now. The current controversy is his link with the Dangal co-actress, “ Fatima Sana Shaikh”.

Many people believe that he dating her and reason behind the divorce. But some people also believe that it might be just a speculation or slander. Aamir Khan was also in limelight regarding his tweet on intolerance in India.

His tweet where he says his wife Kiran Rao feels unsafe in country and wants him to leave the country. These words made sparking uproar not only on social media but also in public life. At last, we hope a good future for both couple.