After achieving independence from Pakistan in 1971, Bangladesh faced several problems including political, natural, and economical. But surprisingly today the economy of Bangladesh is booming more than Pakistan. Though Pakistan is five times bigger than Bangladesh, still the foreign currency of Bangladesh in stock is five times more than Pakistan. Bangladesh is now called ‘New tiger of South Asia’ for its fast-growing economy. While India used to be at the center of the South Asian economic growth. Now data indicates that Bangladesh has quietly made its position to the top. 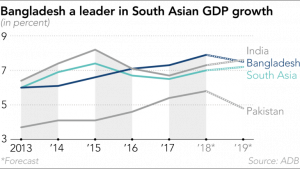 India has been hit hard by the recent global slowdown resulting in its growth dropping to 6% in 2019 while Bangladesh is doing quite good. The economic growth of Bangladesh is 8%. According to the Asian Development Bank, the economy of Bangladesh grew by 7.1% in 2016. Which is the fastest expansion in the history of the past 30 years. And expected to grow more.

The prime minister of Bangladesh, Sheikh Hasina has started the ‘Digital Bangladesh’ program in 2009 and the Information technology industry has highly developed during this period. It is also an important reason for Bangladesh’s success.

The garments manufacturing and textile industry in Bangladesh is extremely successful and Bangladesh stands in the second position in this sector just after China. 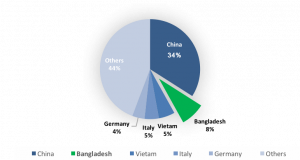 Bangladesh has focused on its agriculture, population control, and every single factor to become the most progressing country. Since 2009, every person in Bangladesh earns three times more than previous. Bangladesh has become self-reliant in food production.

With a population of 160 million this country’s recent economic boom is one of the happiest economic stories of the world right now. 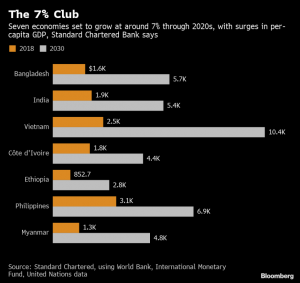 According to a report Bangladesh will become the third fastest growing economy in the world. In terms of achieving high GDP in 2019 and now the world sees Bangladesh as a ‘development miracle’.