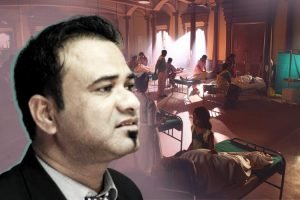 The uproar that went across India regarding death of 60 children in Gorakhpur in August 2017  gave quite sleepless nights to Government. Children were killed due to oxygen shortage and Dr. Kafeel was charged with medical negligence and corruption.

Dr. Kafeel Khan was a practicing pediatrician at BRD Medical College in Gorakhpur where 60 children died due to shortage of oxygen. On Friday he was charges levelled against him. He was labelled with tags such as “ murderer”.  He accepts of getting

death threats too. According to him the real perpetrators responsible for  death of children are roaming freely whereas the case needs to be investigated upon. He have earlier also admitted that there was shortage of liquid oxygen in hospital only because the Yogi Government didn’t paid the vendors.

According to him the Chief minister of Uttar Pradesh is only after saving his health ministers who are in terms the real culprits. He straight away mention that he was made  a scapegoat for the

government. Even his brother was not spared and was shot dead for which no arrest have been made till date now.

He tells in an interview with media that he conducted more than 70 medical camps in last year along with the 25 health activists. He points shortage of doctors and staff in the hospital. He pledges to fight for cause and being the real face of the culprits. He demands right compensation to the bereaved family. For such movement he wants everyone to support him.