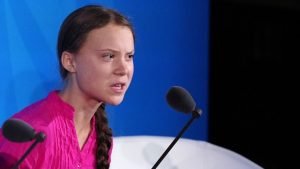 Greta Thunberg is making news worldwide with her deadly glares at US President “Donald Trump” at UN Climate Action Summit. Recently she has been nominated for “Nobel peace award”. Such deathly stare  was highly noticed over worldwide  that a twitter user tweeted that “ Greta Thunberg giving Donald Trump a death stare is highlight of 2019 so far”. But it was a kind of mockery and kind of shameful act  when Donald Trump tweeted “ She seems

like a very happy young girl looking forward to a bright and wonderful future. So nice to see”.

But what was more empowering her speech that she made at UN Climate Action Summit where she was not sparing anyone and everyone was under her radar for environmental degradation. She started her speech in more threatening and more of scolding manner where she has questioned every leader present at UN Climate on promises of saving environment.  Let’s know this empowering girl.

Greta Thunberg is a 16 year old an  environmental activist and came into limelight when she had demonstrated outside Swedish Parliament holding up a sign and calling out for stronger climate action. She was later joined with her school mates who together organize a School Climate strike movement on Friday.

Greta is known for her blunt personality. At home she has convinced her parents to not indulge in meat eating and no more travelling through air. Moreover she travelled to UN summit

through solar powered ship to avoid the environmental degradation.

It’s a kind of lesson that every person should learn from the teenager Greta Thunberg. We need to ponder our thinking and develop social interest instead of confining our life to just buying a flat and family politics and the only contribution to environment is getting pollution control certificate for cars. Our existence on earth is having more purpose and reason.