Seriously this year is in no mood to give good news to us. One more heart-breaking news is coming from Andhra Pradesh where is the emission of toxic gas & poisonous gases had led to several deaths. The death tolls have been increasing and the situation is getting adverse only.

Emission of toxic gases gets leak at LG Polymers near Visakhapatnam kills at least 10; hundred infectious 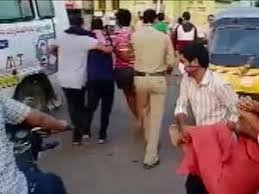 There is major toxic gas & poisonous gases leak at the LG Polymers plant in Vishakhapatnam in early hours of today. As per media sources, till now 10 people are dead while 200 to 500 has been hospitalised. The area of 5 km around the plant is under the radar.

As the gas is highly toxic many believes that death rates may increase at much faster pace. Media reports show dozens of villagers lying unconsciousness on the streets. While other villagers are still trapped in their houses and its nearby colonies.

How serious is this case?

The company was becoming functional after lockdown period of 40 days. All such mis happening happened during this duration. The company mostly succeeded in controlling the gas leak by around 9 am.

Some ambulance staff, who did job of shifting affecting people to hospital are now ill. They felt suffocation by the gas (synthetic chemical styrene).

People started finding difficult to breathe and coming out of home. Clueless of the serious industrial accident. They started searching for a safer location.

Now how the government is dealing with the case?

Prime Minister, Narendra Modi calls for emergency meeting of the NDMA and Union Home Minister Amit Shah over this industrial accident. He says that case and the present situation is quite disturbing.

A NDRF team is working on the spot to help and evacuate the people from the villages and colonies to a safer location. Moreover, government is advising people to cover their mouths and stay calm. They are appealing them to look for a safer location. While they are evacuating them.