Amidst the long-running lockdown implemented due to the novel corona virus-19, many people have developed new interests. Remember all the times when you canceled learning painting or guitar or driving.  You promised yourself to practice yoga every day in the morning but the hectic schedule and the late-night parties kept you from yoga.  Well, now you have every opportunity to grasp every skill you want to add to your resume.  You can finish your favorite novels or binge-watch your favorite TV shows and web series without being disturbed by your angry boss or your over-talkative relatives.

Virat And Anushka In Quarantine

Though most of the people have lost or should I say locked themselves in their own world, yet celebrates steal the limelight.  Celebrities continue to influence our lives in unique ways.  If you talk about influencing then you can’t forget to mention Virat Kohli.  Youth icon, sportsman, role-model are just a few of his badges.  Apart from destroying the opposition team in cricket, he is also quite fashionable off-field.  The captain of the Indian cricket team with his charming wife and actress Anushka Sharma makes an adorable couple.  It is their lovely togetherness that makes them one of the most loved and followed married ones. The large army of followers on twitter, Instagram and Facebook is reliable evidence of that.  The adorable couple is back again with a pleasant surprise for their fans.  Yes, you read it right, amidst the perils of coronavirus they manage to continue their bonds with their fans. 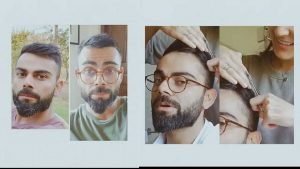 Let me enlighten you.  They have posted a funny video on twitter just a few days ago which has gone viral in all the social media platforms.  As you all know Prime Minister Narendra Modi has called for a nationwide lockdown which has also resulted in the closure of all salons.  So, Anushka Sharma took the matter into her own hands.  In other words, she took kitchen scissors in her hand to help Virat get a haircut. According to Virat “this is what quarantine does to you, you allow things to happen to you”. The new haircut comprises of a gradual fade from the front and gradual length in cascade style from the back.  In this video, you can also catch a short glimpse of Anushka’s shiny and silky hair.  Talking about Virat, you can see him with his rare specs. Anushka posted the funny video in twitter with caption,” meanwhile, in quarantine.” 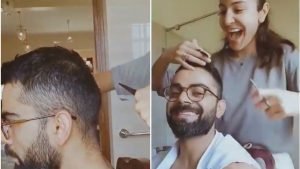 You can see the satisfaction in Virat’s face. You can sense it in his own words,” Guys just see! It’s a very good beautiful haircut from my wife”.  Before uploading this video, Virat also posted a video in which he appealed all the Indians to take the Government order seriously and keep themselves within their houses to be safe. He further added by captioning that the nation needs our support and honesty and requested everyone to wake up to the reality of the situation and be responsible. The videos also featured Anushka who reminded the audience to stay at home and stay safe.