Ratan Tata is Richer than Bill Gates Know the Facts

Have you ever wondered if Tata Group is the wealthiest conglomerate in India, then why is Ratan Tata not the wealthiest person of India? You’ll be surprised to know that he is even richer than Bill Gates and many others on the Forbes list of billionaires but still, he’s not a part of it.

Ratan Tata’s business story ranks in the top Indian success stories that boast the ethics, leadership skills, and entrepreneurship of an Indian businessman. Also, it never fails to provide motivation and inspiration to other budding entrepreneurs and businessmen.

Ratan Tata is an Indian industrialist and businessman born in Mumbai, India on 28 December 1937. Being the great-grandson of Jamsetji Tata, he was the former chairman of the Tata Group (1990-2012) and is the head of the charitable trusts. Ratan has received two of the highest civilian award Padma Bhushan(2000) and Padma Vibhushan(2008) and is admired for his philanthropy and ethical values.

Established in 1868, Tata Group is now known as the largest, most wealthy, and most-admired conglomerate of India. Its products and services are available in almost 150 countries and are operating on six continents. Tata Group has nearly 700,000 employers working with them and it is the third-largest employer after Indian railways and Indian Defence Forces. The total revenue of Tata Group is even more than $100 Billion making it the wealthiest conglomerate of India. It is associated with international brands and surprisingly, 4 out of 5 largest companies in India belong to Tata Group.

Despite all these factors, none of the Tata family members including Ratan Tata ranks in the billionaire list. This is because of various other reasons that Ratan Tata is richer than Bill Gates yet not a part of the Billionaire list. Let’s have a look at those reasons:

Why is Ratan Tata Richer than Bill Gates not a part of the Billionaire list?

Bill Gates is the co-founder of the world’s largest personal computer software company, Microsoft Corporation. Microsoft Corporation was founded in 1975 by Bill and his childhood friend, Paul Allen in New Mexico. He has earned so much name and fame since then. He has been on the Forbes’ list of billionaires from 1995 to 2017 as the richest man in the world. His company has a net worth of US $107 Billion. Also, he now ranks as the second most wealthy person in the world after Jeff Bezos.

Now coming back to the question of why Ratan Tata is richer than Bill Gates but not on the list. In any international conglomerate, the person who runs the company, owns the profit gained in the meantime. In the case of most of the wealthy conglomerate of the world, the owner has the maximum personal wealth. This is because of the shares they’ve in the company they own and run.

But in the case of the Tata group, none of the Tata family members ranks in the billionaire list. This is because 68% of their profit goes to their charitable trusts. Ratan Tata’s net worth is of not more than $1 Billion and the same goes with the other members. This is why they’re not the richest businessmen of India despite being the owner of Tata Group.

Looking at the philanthropy of Tata Group, we can find it since the establishment of the company. They’re working for the well-being of the society including healthcare facilities, education, and social work. 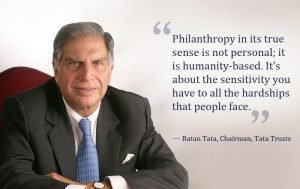 Various trusts of Tata Group are working for the welfare of the people of the society. Moreover, the trustees have the ultimate right to use the money available in the trust for helping the people in need. Tata Group is considered to be the greatest philanthropist of India and has gained international recognition. Sir Dorabji Tata Trust and Sir Ratan Tata Trust are two of the oldest charitable trusts of Tata Group. It means that his ancestors were rich and successful businessmen who lived a life full of simplicity and kindness.

The inspirational story of the Tata family is a true story and a true example of kindness and motivation.

We now know why Ratan Tata is richer than Bill Gates but not on the billionaire list.