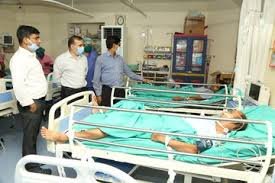 Two days earlier a paper mill in region of Chhattisgarh faces a gas leak. The “Shakti paper mill” in Tetla village is in headlines for the same. Seven workers fell ill after inhaling a poisonous gas at a paper mill. They are still in state of unconsciousness.

This is another incident which happened just after the disastrous case of Vishakhapatnam. This incident has led to death of more than dozens of lives.

The reason behind the gas leakage

Due to lockdown, the paper mill was shut down for a time period. So, after the lockdown period overs, the employees were cleaning the open tank. All the work was under underway for resuming the operation.

Still far the forensic investigation team doesn’t know the exact cause of gas leakage. But it believes it happened because of the accumulation of poisonous gas over a time period.

However, the factory owner did not inform the administration about the incident, which only came to light after the hospital authorities alerted the police.

According to the mill owner Deepak Gupta, three men were cleaning the paper pulp inside the mill, which was to reopen open soon. They started feeling unconsciousness. Later more people came for help of these men.

Such industrial disaster is common after the factory is non-operational. The factory/ organization needs to maintain proper safety guidelines for safety of its employees. It’s a known fact that there is accumulation of gas if its not operated on daily basis.